You can add HTML directly into this element to render on the page.

Just edit this element to add your own HTML.

A lifelong resident of the Carolina Lowcountry, William P. Baldwin is an award-winning novelist, biographer and historian. He graduated from Clemson with a BA in History and an MA in English.  He ran a shrimp boat for nine years, then built houses, but the principle occupation of his life has been writing.

His works include Plantations of the Low Country; Low Country Plantations Today (both with architectural photographer N. Jane Iseley); the oral histories Mrs. Whaley and Her Charleston Garden; and Heaven is a Beautiful Place. The screen play for the latter earned him a Silver Remy at this year’s Houston Film Festival.

“Mrs. Jenkins’ sweet braised cabbage, her extra-cheesy macaroni and her state-of-the-art fried chicken [are] all richly worth the trip.” ”

“The okra stew over Hoppin’ John was amazing! ” 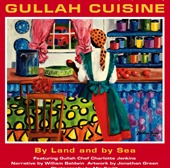 Take a journey with Chef Charlotte Jenkins into her creative kitchen, and also into her life. Charlotte and her husband Frank grew up Gullah at a time when the Old Ways were giving way to the New Ways. They are of the generation that bridged those two worlds. In many ways, they have lived the American dream, rising up from humble origins to build a nationally recognized Gullah restaurant where today they would regard being interviewed by Southern Living, Gourmet Magazine, The New York Times, et al, as all in a day’s work.

Charlotte learned to cook Gullah the way her mama, her grandmamma and all the mamas that have come before her – by working alongside one another. But she also trained at Johnson & Wales Culinary Institute in Charleston where she adapted the traditional recipes to be more healthful. In1997, she and her husband Frank opened Gullah Cuisine in Mount Pleasant, South Carolina. They are now widely acknowledged as offering the best of authentic Gullah cooking. Gullah Cuisine: By Land and By Sea brings Charlotte’s wonderful recipes to you. But it does more than that – the book is a tale of connection, sharing a world the Gullah built. It features a narrative by critically acclaimed author William P. Baldwin, photographs by Pulitzer-prize-nominee Mic Smith and art by beloved Gullah painter Jonathan Green. Pat Conroy describes the Gullah people depicted in Jonathan Green's world as looking like “they got dressed while staring at rainbows.”

Recipes to tickle your tongue, stories to feed your soul and pictures to delight your eyes. Enjoy!

Charlotte Jenkins, chef and owner of Gullah Cuisine in Mt. Pleasant, SC, has been cooking Gullah foods since she was nine years old. It wasn’t until she moved to New York and started entertaining guests in her home that she realized there was something special about her Gullah culture. In 1997 she opened Gullah Cuisine. She and her husband also operate CJ’s Catering Service.

Jenkins, a 1988 graduate of Johnson & Wales School of Culinary Arts, learned that opening a restaurant was risky business, but she gave it a shot. The Washington Post, NY Times, Gourmet and Southern Living have all tapped into what’s going on in the kitchen at Gullah Cuisine. Jenkins says its “food that speaks to ya!”