​The stories in Wheels Up: Sky Jinks in the Jet Age are the real deal, true antics of a jet age pilot in the high-octane environment of the cockpit. Some will give you pause and make you think, some will knock the wind out of you, and some will make you throw your head back and laugh.

From the hallowed halls of The Citadel to the sometimes dark skies of Vietnam to the pranks and high jinks of a game-faced pilot, Captain Steve Taylor will take you by the seat of your pants and fly you to the moon (metaphorically speaking).

"...Readers have a front-row seat during harrowing landings in Vietnam, close calls flying for Delta, and other misadventures...(Taylor holds a U.S. Coast Guard captain's license and, alone and becalmed at sea, gives his inner poet free rein.)...Readers will overlook the frat-boy quality of the early high jinks, because when push came to shove, Taylor proved to be a sensitive, responsible grown-up. They will come to like Captain Taylor very much, which is more than half the charm of a good memoir and a sign of a good memoirist. A good read, of special interest to those who love flying."
Kirkus Reviews 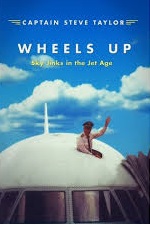 Steve Taylor is a 1960 graduate of The Citadel with a degree in civil engineering and has served six years as a pilot for the U.S. Air Force with service in Vietnam. Following a long flying career, he retired as an international airline captain. He has owned and operated a commercial construction company and is a Coastal Master Naturalist.

In addition to flying over most of the world, Taylor has lived in North and South Carolina, Georgia, Tennessee, Texas, and Okinawa. He has five grown children. He and his wife, Nancy, currently split their time between Atlanta and Charleston.